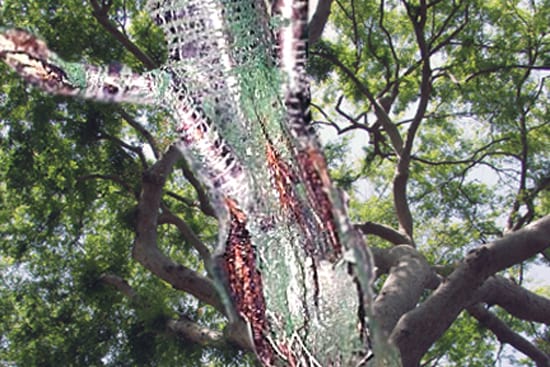 Euzophera semifuneralis.
The larvae of the American Plum Borer (APB) bore into the tree, leaving reddish orange frass and gum pockets called gummosis. The boring is most damaging to the scaffold crotches or graft unions of young trees. Vigorous trees will heal over, but with heavy, prolonged infestations, scaffolds may break with wind or a heavy crop.
The American Plum Borer (APB) is a cambium-feeding moth pest of fruit and ornamental trees.  It is the major borer pest of stone fruits and ornamental  trees causing up to a 33% decline in the life span of tart cherry trees there.
Significant numbers are also found in peach trees infected by canker diseases. Widely distributed throughout most of North America and parts of South America, it has an extensive range of hosts including at least 15 families of fruit, nut, ornamental, and forest trees, and a few woody annuals.b

Bark damaged by mechanical harvesters, which provides larvae an entryway to the cambium.
Male and female APB are identical. Wingspread ranges from 17-28 mm (2/3-1 inch. The forewing is narrow and somewhat triangular; the hind wing is broad and fringed on the trailing edge. The overall color of the moth is a light grayish brown.

Eggs are oval and covered with a network of triangular facets. They are dirty white when first laid but darken to pink, then deep red, as they mature. They are small (~/3 to ]/2 mm) and are laid singly or in small masses in or near the gummosis caused by bark wounds.

APB larvae range in color from grayish green to grayish purple; the head capsule, cervical shield, and anal plate are yellow to brown. The cervical shield has dark markings on either sid. In contrast, larvae of the peachtree borer and lesser peachtree borer, which may be found along with APB larvae, are creamy white with a yellowish-brown to dark brown head capsule. In addition, APB larvae have two rows of crochets (hook-like spines) at the tips of the abdominal prolegs, while sesiid larvae have only one row. Long primary setae are apparent on APB larvae, but not on the sesiids.
APB larvae feed on cambium. They can only enter the cambium layer through openings created by mechanical damage, diseases, sunscald, winter injury, etc. Entry is most commonly gained through splits in the bark of tart cherries caused by mechanical harvesters cankers in peaches caused by Cytospora spp. and other pathogens and black knot cankers in tart cherries and plums.

Because APB larvae feed horizontally, they may eventually girdle the trunk or scaffolds. However, damage may go unnoticed because the outer bark usually remains intact.
APB can also spread plant pathogens. Larvae may contribute to the enlargement of Cytospora cankers and ovipositing females can carry spores from one tree to another.