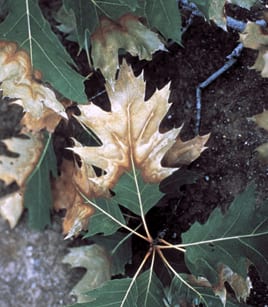 These are Phytoplasmas, formerly called mycoplasma.

Ash yellows has been reported only in North America. The main range of the disease includes parts of 16 northeastern and midwestern states and the southernmost portions of the Canadian provinces of Ontario and Quebec. Ash yellows has also been found in two southwestern locations.

Environmental factors such as drought, excessive salt, or root damage have long been known to contribute to ash yellows.

Field diagnosis of ash yellows is sometimes difficult, however laboratory tests for ash phytoplasma are now available. Reduced growth, deliquescent branching, “witches brooms” and progressive decline are typical symptoms of ash yellows, but may also result from other factors.

The Phytoplasma moves thru sieve cells in the phloem, causing death of the inner bark. Progressive root loss results in chlorosis, stunting, decline and death. Leafhoppers carrying phytoplasma, transmit the pathogen while feeding on host trees. Symptoms may develop up to 3 years after phytoplasma is detected in ash phloem. Tolerance to ash phytoplasma is common.