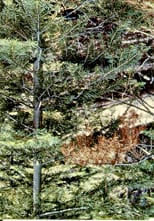 Spores contact wounds or branch stubs and germinate in moist atmosphere; living wood is invaded where the fungus becomes established at periphery of dead and live wood. New spores are produced in flask-shaped fruiting structures (pycnidia). Waxy tendrils release spores when wet to re-infect new wounds and branch stubs. Invasion by spores is direct or through needle scars in spruce and fir. Spores are either airborne or spread by insects, clothing, or pruning tools.