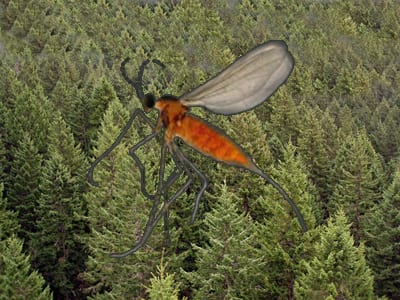 Contarinia pseudotsuga
Douglas-fir cone gall midge is considered the most significant pest of Douglas-fir seed orchards and can destroy up to 70 percent of the seed crop.
The midge can be found in plantings of Douglas fir trees.
Maggots in the galls are orange in color and about 2mm long. Adult males have bright orange abdomens, beaded-antennae that are approximately as long as the body, and they are 2.3 to 2.8 mm in length.

Larval or maggot feeding causes a gall in the vicinity of the seed. This can kill the seed or fuse it to the cone scale and it can’t be shed or extracted. All seeds in heavily infested cones can be destroyed. This pest is persistent in Douglas-fir seed orchards throughout the Northern Regions.

Douglas-fir needle midge overwinters as larvae in soil under infested trees. In early spring, larvae pupate and adult midges emerge as buds are expanding. In Oregon and Washington, where this fly has been a pest for many years, emergence may start as early as the beginning of April and continue for 4-5 weeks.
Female midges have long ovipositors with which they place several orange eggs in expanding buds and on elongating needles.
Larvae hatching from the eggs chew into the needle, causing elongating needles to form a gall around the larvae. One or more white maggotscan be found inside affected needles during the summer. At the site of the gall, the needle is frequently bent .
The damaged area is initially pale in color but as the season progresses, will darken and eventually turn brown. In late summer, larvae emerge from the undersides of the needle and drop to the soil. The emergence holes are irregular in shape and may give the appearance of a slit or rupture. Secondary fungus can infect the needle and gall, further complicating identification of the pest .