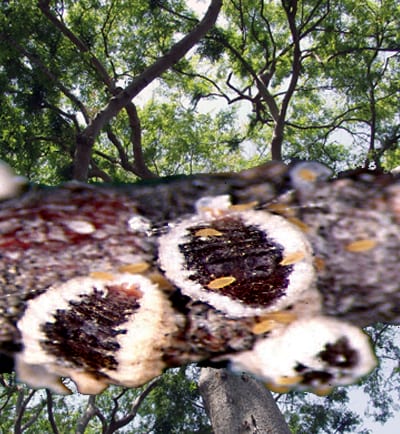 Gossyparia  spuria
European elm scale is often first noticed on urban elms when honeydew produced by feeding scales becomes a nuisance on parked cars or outdoor furniture. Branches on infested trees are typically blackened by sooty mold growing on the honeydew. Closer examination of the branches reveals female scales, which appear as gray or reddish brown discs surrounded by a white, waxy fringe less than 1/8-1/2 inch (<10 mm) long (fig. 1). Tiny, orange crawlers can be seen on leaves along main veins in summer (fig. 2).

Most Elms (Ulmus) species are effected , (primarily American elm), Chinese Elms and other Elms
Eggs hatch in June and July from beneath mature female scale coverings. Summer is spent as tiny, yellow nymphs on the undersides of leaves. The insects crawl back to branches in late summer and attach themselves to twigs and branches. Female scales cover their bodies with a gray, waxy covering, and they overwinter in the second instar. Winged and unwinged males, when present, overwinter in small white cocoons. In spring, females grow and become a dark red-brown and produce copious amounts of honeydew. Reproduction can be sexual or asexual.

The damage is seen by honeydew dropping, sooty mold on leaves.
European elm scale feeding can be a nuisance but heavy infestations cause yellowing leaves that may drop early, and heavy feeding can cause branch dieback or death of trees.