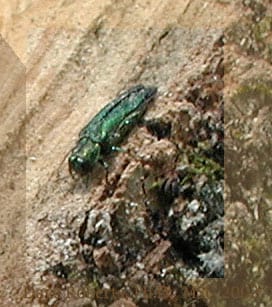 Adults are larger and a brighter green than any of the native North American species of Agrilus. They are slender, elongate adults are 7.5 to 13.5 mm long; females are larger than males. The larvae reach a length of 26 to 32 mm, are cream-colored and dorso-ventrally flattened . Their brown head is mostly retracted

Ash Trees (Fraxinus sp.) are their host trees and are found in China, Japan, Korea, Mongolia and eastern Russia (Yu 1992), was unknown outside of Asia until it was discovered in Michigan and Ontario in June, 2002. They have spread to many U.S. States and seem to be be spreading nationwide. They can be recognized by their Serpentine galleries excavated by feeding larvae disrupt nutrient and water transport, causing branches and eventually the entire tree to die. Ash trees of all species and size, regardless of growing conditions, have died within 1 to 4 years of initial infestation.

Adult emergence begins in mid to late May, peaks in early to mid June, and continues into late June. The adults are active during the day, particularly when conditions are warm and sunny. Most beetles remain in protected locations in bark crevices or on foliage during rain, heavy cloud cover, high winds or temperatures above 32°C (90°F). The beetles usually fly within 2 meters of the ground. Adults, which are present into August, feed on up to 0.45 cm2 of foliage per day, leaving irregularly-shaped patches of leaf tissue with jagged edges. Male adults live an average of 13 days and females live about 21 to 22 days. Females can mate multiple times and oviposition begins 7 to 9 days after the initial mating. Females lay 65 to 90 eggs during their lifetime. Eggs are deposited individually on the bark surface or in bark crevices on the trunk or branches. Eggs hatch in 7 to 10 days. After hatching, first instar larvae chew through the bark and into the cambial region. Larvae feed on phloem and the outer sapwood for several weeks. The S-shaped feeding gallery winds back and forth, becoming progressively wider as the larva grows. The insect overwinters as a full-grown larva in a shallow chamber excavated in the sapwood. Pupation begins in late April or early May. Newly enclosed adults may remain in the pupal chamber for 1 to 2 weeks before emerging head-first through a D-shaped exit hole that is 3-4 mm in diameter.