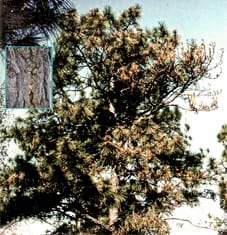 Macroconidia produced on small, cushion-like, salmon-colored sporodochia (approximately 1/16 in. wide and 1/32 in. high) on dead shoots and twigs, generally on needle fascicle scars. They are present all year, but most evident in autumn and winter. Conidia are colorless, having from 1 – 4 cells, curved, elongate, and pointed; disseminated by wind, insects, and splashing water throughout the year.