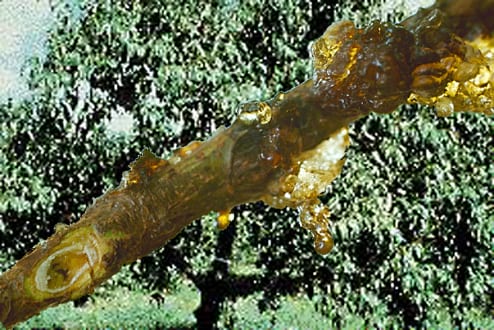 Problems are almost always associated with widespread incidence of Cytospora canker and, to a much lesser extent, pruning wounds, winter injury, and mechanical damage.

Adults are day-flying moths that resemble wasps. Veins and margins of transparent wings are fringed with steel-blue scales; the body is blue and narrowly fringed with yellow. Males of lesser peachtree borer have yellow scales on the top of the head between the eyes and black scales between the antennae.

The damage to trunk and limbs can be seen by wads of sap dripping from them called “Gumosis”.

There are two and possibly a partial third generations each year; the first flight occurs during May and June, and the second during August and September in the east.

The borer overwinters as larvae and reaches full growth during April and May. Larvae eat an exit hole nearly through the bark, spin a cocoon, and pupate in a small cavity. In 3 to 4 weeks, a clearwinged moth emerges, leaving an empty pupal skin projecting from the burrow.

Adults are active for several weeks. The female moth is capable of laying several hundred eggs in cracks, under bark scales, and in cankered areas. Moths are attracted to trees that have been injured or previously infested. Eggs hatch in a week to 10 days, and young worms move to the inner bark and continue to feed.