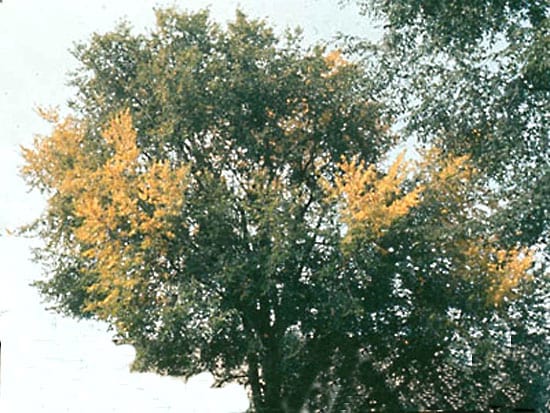 Phytoplasma.
Usually, the signs of elm phloem necrosis become visible between July and September. Rootlet necrosis is followed by degeneration of phloem and cambium in the roots and the lower trunk Elm yellow is present in the phloem tissue of infected trees.

Elm yellows is a systemic disease of elms caused by a bacteria-like organism called a phytoplasma.
Two former names for this disease are elm phloem necrosis in the U.S. and witches’ broom in Europe.

Due to the deposition of callose within the sieve tubes and the subsequent collapse of these cells and their neighbors, the inner phloem and the outer wood at the base of the stem turn lemon-yellow to butterscotch brown with or without flecks. The discolored area gives off a faint odor of oil of wintergreen (methyl salicylate).
The cambium fails to replace the affected phloem, since the newly produced cells become necrotic as well. In young trees, the discoloration may extend to the branches.

As the phloem necrosis progresses, the leaves of EY infected elms will droop , curl, turn bright yellow then brown, and premature defoliation takes place (Photo 68, {[896]}). The foliage discoloration generally occurs over most of the crown simultaneously. Especially the top leaves are boat-shaped. No twig wilting is observed. In such elm species as Ulmus rubra, EY infection results in the formation of witches’-brooms, a dense cluster of shoots of the same age. Due to the loss of apical dominance, the terminal shoot elongates no more than others on a branch, and the buds in the leaf axils are released as soon as they form.
Although some elms die within a few weeks after EY infection, usually when disease symptoms appear in June/July the tree will be killed by the end of the growing season. The symptoms of a late summer or autumn infection with EY cannot be distinguished from normal autumn senescence. Trees infected late in the season will have a crown with thin twigs and small leaves the following spring. In this new growing season, the infected elms can be expected to die soon. EY symptoms exhibited by these autumn infected elm trees can easily be confused with DED symptoms expressed byelms infected with the latter disease the previous year.

Affected are;
Ulmus alata, U. americana, U. crassifolia, U. glabra, U. japonica, U. minor, U. parvifolia, U. pumila, U. rubra, U. serotina, and U. villosa