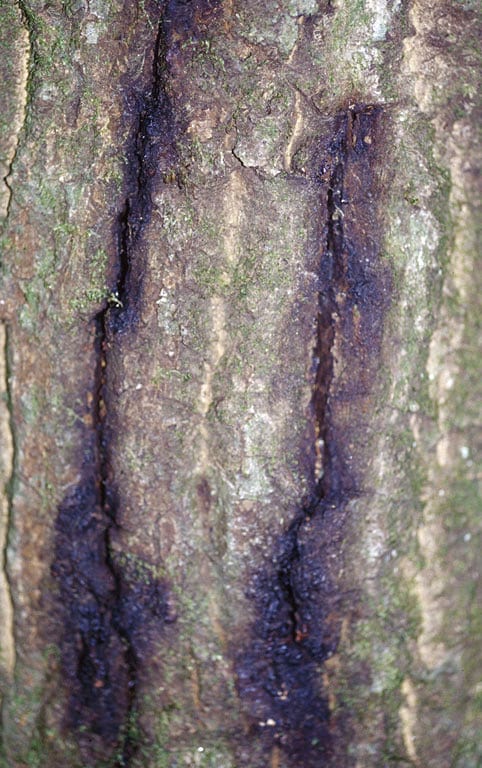 Phytophthora ramorum is the oomycete plant pathogen known to cause the disease sudden oak death (SOD). The disease kills oak and other species of trees and has had devastating effects on the oak populations in California and Oregon, as well as being present in Europe. Symptoms include bleeding cankers on the tree’s trunk and dieback of the foliage, in many cases eventually leading to the death of the tree.

It also infects a great number of other plant species, significantly woody ornamentals such as Rhododendron, Viburnum, and Pieris, causing foliar symptoms known as ramorum dieback or ramorum blight. Such plants can act as a source of inoculum for new infections, with the pathogen-producing spores that can be transmitted by rainsplash and rainwater.

First reported in 1995, and the origins of the pathogen are still unclear, but most evidence suggests it was repeatedly introduced as an exotic species.[

The disease is known to exist in California’s coastal region between Big Sur, in Monterey County and southern Humboldt County. It is confirmed to exist in all coastal counties in this range, as well as in all immediately inland counties from Santa Clara County north to Lake County. It has not been found east of the California Coast Ranges, however. It was reported in Curry County, Oregon (just north of the California border), in 2001. Sonoma County has been hit hardest, having more than twice the area of new mortality of any other county in California.

In North America
It was first discovered in California in 1995 when large numbers of tanoaks (Lithocarpus densiflorus) died mysteriously, and was described as a new species of Phytophthora in 2000. It has subsequently been found in many other areas, including Britain, Germany, and some other U.S. states, either accidentally introduced in nursery stock, or already present undetected.

In tanoaks, the disease may be recognized by wilting new shoots, older leaves becoming pale green, and after a period of two to three weeks, foliage turning brown while clinging to the branches. Dark brown sap may stain the lower trunk’s bark. Bark may split and exude gum, with visible discoloration. After the tree dies back, suckers try to sprout the next year, but their tips soon bend and die. Ambrosia beetles (Monarthrum scutellare) will most likely infest a dying tree during midsummer, producing piles of fine white dust near tiny holes. Later, bark beetles (Pseudopityophthorus pubipennis) produce fine, red boring dust. Small black domes, the fruiting bodies of the Hypoxylon fungus, may also be present on the bark. Leaf death may occur more than a year after the initial infection and months after the tree has been girdled by beetles.

In coast live oaks and Californian black oaks, the first symptom is a burgundy-red to tar-black thick sap bleeding from the bark surface. These are often referred to as bleeding cankers.

In addition to oaks, many other forest species may be hosts for the disease; in fact, it was observed in the USA that nearly all woody plants in some Californian forests were susceptible to P. ramorum.[4] including rhododendron, madrone (Arbutus menziesii), evergreen huckleberry (Vaccinium ovatum), California bay laurel (Umbellularia californica), buckeye (Aesculus californica), bigleaf maple (Acer macrophyllum), toyon (Heteromeles arbutifolia), manzanita (Arctostaphylos spp.), coast redwood (Sequoia sempervirens), Douglas fir (Pseudotsuga menziesii), coffeeberry (Rhamnus californica), honeysuckle (Lonicera hispidula), and Shreve oak (Quercus parvula). P. ramorum more commonly causes a less severe disease known as ramorum dieback/leaf blight on these hosts. Characteristic symptoms are dark spots on foliage and in some hosts the dieback of the stems and twigs.[5] The disease is capable of killing some hosts, such as rhododendron, but most survive. Disease progression on these species is not well documented. Redwoods exhibit needle discoloration and cankers on small branches, with purple lesions on sprouts that may lead to sprout mortality.

In Europe, Ramorum blight was first observed on rhododendron and viburnum in the early 1990s, where is was initially found mainly on container-grown plants in nurseries. The principal symptoms were leaf and twig blight.
By 2007, it had spread throughout nurseries and retail centers in 16 European countries, and had been detected in gardens, parks, and woodlands in at least eight countries. It has not caused significant harm to European oak species.

In 2009, the pathogen was found to be infecting and killing large numbers of Japanese larch trees (Larix kaempferi) in the United Kingdom at sites in the English counties of Somerset, Devon, and Cornwall. It was the first time in the world that Phytophthora ramorum had been found infecting this species. Since then, it has also been found extensively in larch plantations in Wales and in southwest Scotland, leading to the deliberate felling of large areas. The UK Forestry Commission noted that eradication of the disease would not be possible, and instead adopted a strategy of containing the disease to reduce its spread. Symptoms of the disease on larch trees include dieback of the tree’s crown and branches, and a distinctive yellowing or ginger colour beneath the bark. In August 2010, disease was found in Japanese larch trees, in Counties Waterford and Tipperary in Ireland.