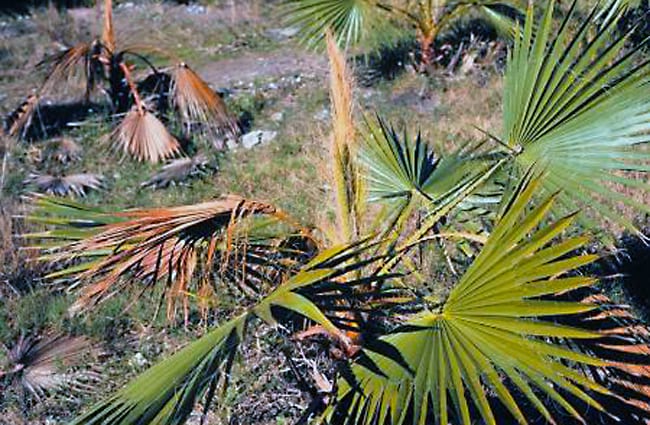 This Disease is the result of a weak but opportunistic pathogen, pink rot primarily is a secondary disease that affects stressed or weakened palms. While it can attack all parts of a palm, it is most problematic in the growing tips, or apical meristem where new leaves are produced, and in newly emerged leaves.
Pink rot affects nearly all outdoor landscape and indoor palms in California, including king palm (Archontophoenix cunninghamiana), bamboo palms (Chamaedorea species), some date palms, Chinese windmill palm, kentia palm (Howea forsteriana), queen palm, and California and Mexican fan palms.

A variety of symptoms characterizes pink rot, including spotting and rotting along rachis and leaves; rotting along leaf tips, leaf bases and trunks; and stunting and distortion of new leaves. Trunk rot is possible in some cases. Pinkish spore masses, from which the disease derives its name, often are present. A brownish syrupy fluid also might be present. Infected plants weaken and decline and eventually can die.

Like diamond scale, disease severity frequently is cyclical in large, established palms. For example, the pathogen can infect growing tips and spear leaves, the youngest leaves that have not yet unfolded, during the cooler, moist weather of winter and spring when leaf production and growth are slow. This is especially true of the California fan palm. As weather warms in late spring and early summer and the winter-produced spear leaves push out and unfold, you can see the damage even though the disease no longer is active. The palm then produces an abundance of disease-free leaves during vigorous summer and fall growth. As leaf production and growth slow in the winter, the disease becomes more active again. This cyclical nature and the manner in which palms produce leaves sequentially in the crown often results in a distinctive pattern of a few damaged leaves regularly distributed among otherwise healthy ones.

Pink rot is closely associated with queen palm and California fan palm, especially those growing near the coast, causing spots and rot on leaves and growing tips and sometimes leading to death. It also can cause trunk decay and cavities in king palm, although its role in causing these symptoms on queen palm and other species is unconfirmed. Pink rot is unusually problematic on bamboo palms in nurseries and indoors where it causes leaf and trunk rot, bleeding, wilt, and death.