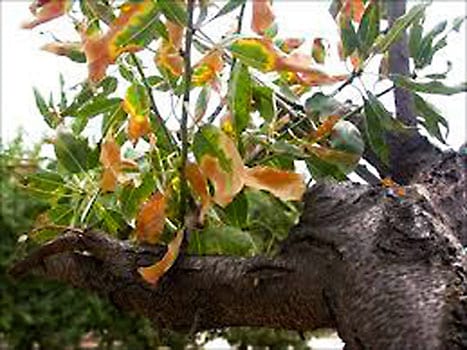 Xylella fastidiosa.
The bacterium clogs water-conducting xylem cells and is
associated with a leaf scald.

Symptoms begin as a fading or bronzing along the margins or tips of leaves. Leaf tissue soon dies and becomes a dry brown. Leaves may die inward from the margin in several steps. The symptoms may begin on a single branch, but eventually the entire tree will be affected. Symptomatic leaves will drop in late summer.
Additional symptoms include,  of these are; nutrient deficiency or toxicity, drought stress, herbicide poisoning, root death or a delayed reaction to winter cold damage.

This diesease is widespread throughout North America.
The pathogen is spread by leafhoppers and high populations of leafhopper vectors contibute to heavy infections.