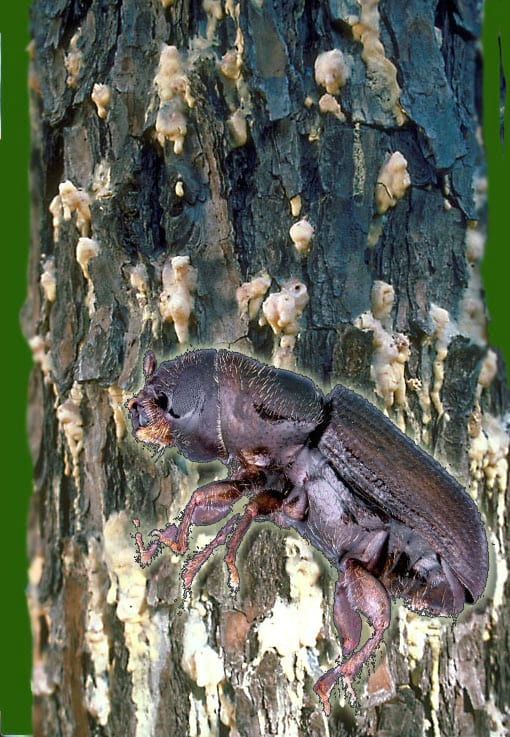 Dendroctonus frontalis,
The Southern Pine Beetle, is a species of bark beetle native to the forests of southern United States, Mexico and Central America. It has a hard reddish brown to black exoskeleton and measures approximately 3 mm (0.12 in), about the size of a grain of rice. It is short-legged, the front of its head is notched and the hind of its body is round.

Southern pine beetles are 1/8 inch long and have cylindrical, reddish-brown to black bodies. There are several overlapping generations each year.
All stages of the life cycle (egg, larva, pupa, and adult) can be found in trees at any time. Development is faster in the summer (26 days) than during the winter (54 days). Following a period of relative inactivity in the winter, adults begin to fly again in the spring.
Females attack 6 to 30 feet above the ground on mature trees and bore into the bark. They create galleries in which they mate and lay eggs. The yellowish white, legless grubs feed in the inner bark, enlarging their tunnels as they grow. Mature larvae move to the outer bark and create a cell in which they pupate.
New adults chew through the bark, leaving small, clearly visible, open exit holes. Adult emergence may continue for an extended period of time. Generally, they leave the host tree and aggregate on a nearby tree; however, some may fly several miles before attacking a new tree. When adults successfully attack a new host tree, they produce a pheromone or chemical scent that attracts other males and females. Within a few days, thousands of beetles may attack a tree and overwhelm its defenses. Excess beetles land on and colonize nearby trees, creating “hot spots,” and the infestation expands.

Southern pine beetle infestations are characterized by trees with reddish brown crowns surrounded by those with green needles. Obvious signs of infestation include white pitch tubes, running pitch, sawdust at the base of the tree, and many small emergence holes in the bark.
Larvae chew curved or S-shaped galleries under the bark in the inner bark and cambium layer, and can girdle and kill the tree. In addition, the beetles introduce a fungus that can be lethal to the tree. Other species of bark beetles can be present in the same tree but their larvae produce I-, Y-, or H-shaped galleries.
The beetles usually are attracted to weakened mature trees, those more than 15 years old and with a trunk diameter of less than 6 inches.
During outbreaks, they attack trees that appear to be healthy and vigorous. Infestations usually begin on the mid-trunk area and then expand up and down the length of the tree. Resistant species such as slash, longleaf, and eastern white pine, have a high resin exudate that provides an effective defensive mechanism against the beetle. However, even resistant trees can be attacked successfully when the beetles are very abundant.