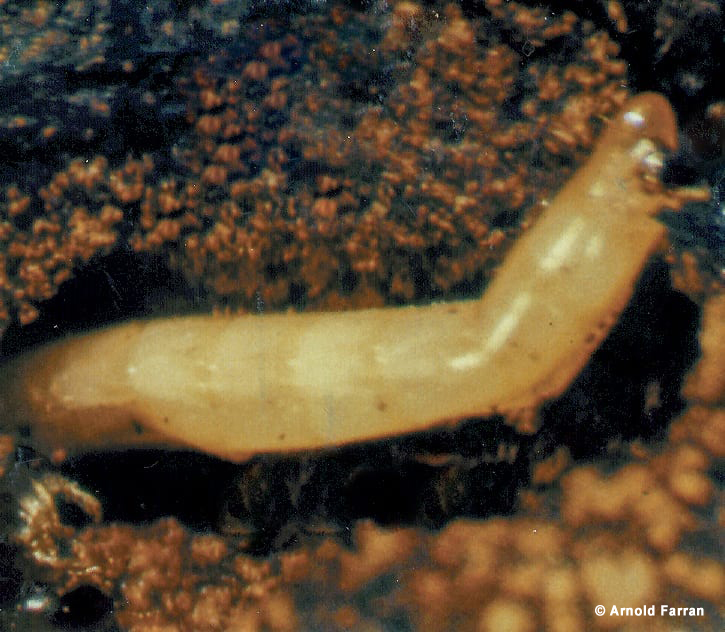 Ramosia resplendens (clearwing moth)
The adults have a wingspan of about 1 1/4 in. long; black with yellow bands around thorax, there wings are clear and antennae almost half the body lengthand black.

The eggs are laid singly in small cracks or depressions of trunkand are yellow.

Their larvae are pinkish-white with and have a brown head almost 3/4 in. long at maturity. They bore into inner bark in twisting tunnels over an area about 100 sq.cm. They do not feed on heartwood. They cause the to bark sloughs off above tunnels.

They pupate near exits of tunnels, then loose skin often exposed as it exits after the adults emerge. Frass may exist at tunnel entrances.
Two major California trees are effected by this insect, the Western sycamore and coast live oak (Quercus agrifolia).

They seem to stay around central and Southern California.

Older trees seem to be preferred that are under drought conditions , and wounds.

Sloughing bark is obvious, often looking like mud on sycamore their are holes with some bleeding on oak; a small amount of frass on trunk or around holes and branch dieback occures.

The adults emerge from May to early August, laying eggs singly in cracks in bark or bark depressions, favoring wounds. Larvae bore into inner bark, feeding while making torturous tunnels. They feed most of the winter and pupate in early spring, at which time adults emerge (usually in May) from the bark.