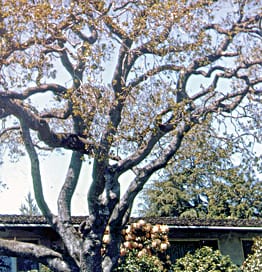 All oak species are hosts.

This complex has been reported throughout the continental United States.

Symptoms vary according to host and fungus involved. Initial discoloration of leaf margins, sometimes with interveinal yellowing; later total yellowing possible, followed by stunting, slow to quick wilting, and dieback; usually evident first in upper crown. Leaves may or may not fall prematurely. As disease progresses individual branches may have thinner foliage, followed by a thinning of the entire crown. Vascular discoloration varies with organism, red-brown to black-blue, in twigs and/or root crown. Tree may die in as few as 2-3 months, or death may be gradual over 3-8 years.

Lethal infection, generally through roots from soilborne phase of fungus. Some of the fungi (Botryodiplodia, Diplodia) may become established as twig-canker inciters, at which stage decline is slow. Falling branches and twigs may introduce the fungus to the root area.