The Asian longhorned beetle, Anoplophora glabripennis, is a wood-boring insect that is capable of destroying 30% of the urban trees in the United States at an economic loss of $669 billion. Infestations of this invasive beetle have been found in Ohio, New York, New Jersey, Massachusetts, and Illinois, and they have been shown to feed on more than 100 different tree species, with a preference for maples, poplars, aspens, cottonwoods, and willows. 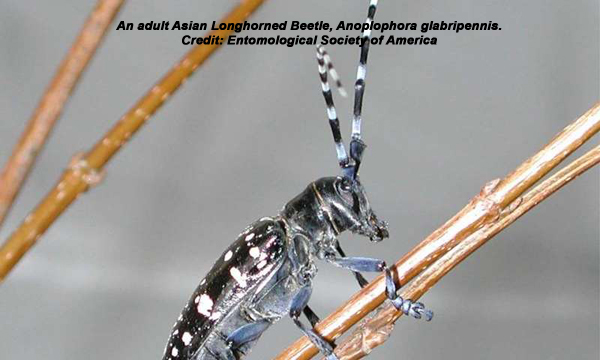 Now a new, open-access article in the Journal of Integrated Pest Management (JIPM) provides a comprehensive overview of the ALB, including a review of its biology, life stages, distribution, ecology, and methods of detecting and controlling it.

“There have been several reviews of ALB that were more for scientists, but this one is more for managers—people who are dealing with them,” said co-author Melody Keena, a research entomologist with the U.S. Forest Service. “This is a good summary of the scientific backing for everything the cooperative eradication programs are doing. They can point the public to this document for more information, especially because it’s written for JIPM in language that non-scientists can understand.”

The supplementary tables in the JIPM article will be particularly helpful for managers, according to the authors. The first lists nearly 160 different trees on which the ALB can feed, oviposit, or complete development under field conditions. Another lists tree species that are not considered to be ALB hosts, so they may be good choices for replanting efforts.

Because the ALB is often first noticed by the public, the authors stress the importance of finding them sooner than later.

“We highlighted early detection as an important part of the eradication program because the faster they are found, the less they have spread,” Dr. Keena said. “Traps baited with pheromones and plant volatiles (plant smells) that our research group developed are a newer tool that is helping to detect this beetle, but all infestations found in the U.S. to date have been spotted by the public and brought to the managers’ attention.”

The authors hope that forest managers and others will put this insect profile to use.

Provided by: Entomological Society of America