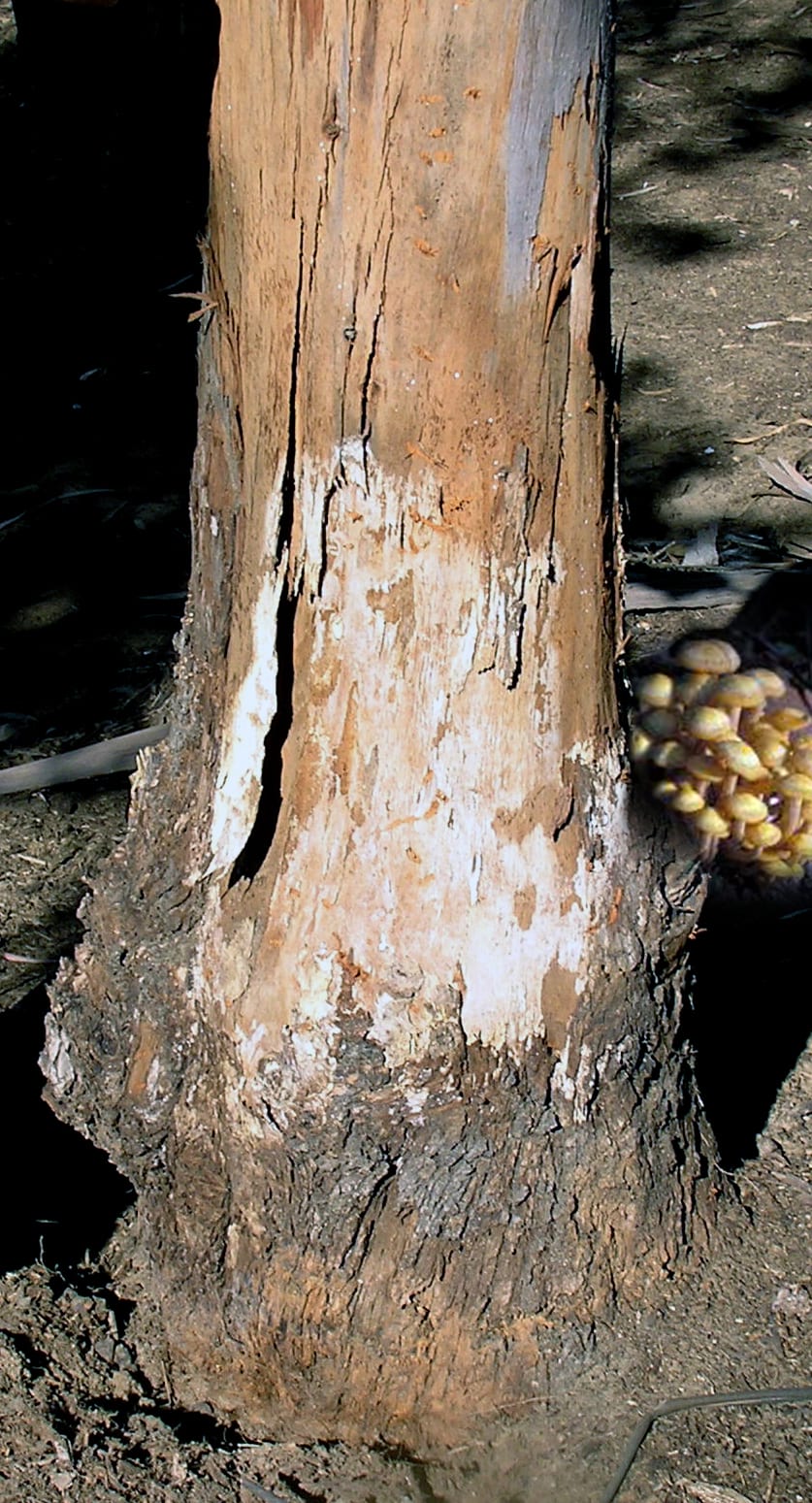 Armillaria mellea
AKA,  Oak Foot Fungus, Oak Root Rot
This fungus attacks most trees and is found world wide.
Trees infected by Armillaria sp. usually exhibit thinning crowns, declining growth increments, foliage chlorosis, distress cone crops, and heavy basal resin flow. Hardwoods may exhibit symptoms of crown decline, may appear to die suddenly, or may be wind thrown. Occurrence of white mycelia fans under the bark of roots and lower stems is diagnostic. Advanced decay is yellow, stringy, and malodorous. Rhizomorphs (black or brown shoe string-like structures) may be found under bark, and golden-colored mushrooms of the pathogen often appear around the bases of infected trees in fall. Infected trees commonly occur in distinct disease centers but also may have scattered distributions.

Armillaria root disease is often associated with trees under stress. It is most commonly found on sites with compacted soils where trees have been poorly planted, where many trees have been wounded, or where there has been a poor match of stock to site. When A. mellea is encountered on conifers, it is usually in an area where they are growing close to hardwoods.

Armillaria is often associated with forest and landscape trees. Symptoms of the disease are not clear-cut and may be similar to those caused by other diseases or environmental conditions. Commonly, an infected tree will show a gradual decline, evidenced by small, yellowish leaves, reduced growth, and dieback of branches. Trees which are chronically infected may wilt suddenly during periods of stress, such as drought. Infected trees can be wind thrown but most die standing; many are predisposed to bark beetle infestation.
It spreads between trees occurs most commonly via fungal growth across root contacts and to a much lesser extent by rhizomorphs. Rhizomorphs can grow short distances (up to a few feet) through soil to cause infection on nearby susceptible roots. Some trees can effectively resist the fungus at the time of initial infection by walling it off. However, if the tree subsequently becomes stressed or is cut, the fungus may break out of the callus tissues formed around infected areas on roots and spread rapidly in the wood. Once in a root, the fungus spreads proximally and distally within it. Fungal mycelia can survive for at least 35 years in old-growth stumps and roots before being replaced by other organisms. Survival of the fungus is influenced by stump size, tree species, and habitat type. Larger infected stumps provide a more substantial food base and longer survival. The fungus survives longer in stumps of resinous hosts than in those of nonresinous hosts. Spore spread can occur but is uncommon