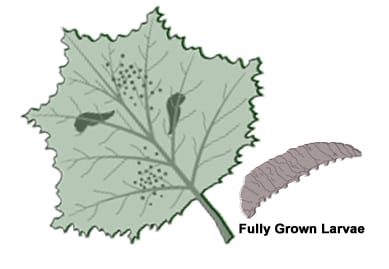 There are many other species that cause leaf mining injury.

Leaf miner larvae are small, white, and flattened; 1/4 in (6mm) long when grown. The larvae and black fecal matter are easily seen on infested leaves when held to light.  The adults are small, black sawflies about 1/8 in. (93mm) long, with wingspread of 1/4 in. (6mm). They can be found on or around unfolded leaves in spring.

Many plant species are favored and found in North America.

Mining or tunneling activity by larvae in leaf tissues produces obvious brown blotches or blisters on leaves. Trees generally become uniformly brown, although the tops are most often severely affected. Healthy trees can be infested without being seriously injured. Repeated infestations over several years can significantly weaken a tree, leaving it vulnerable to attack by other pests, such as borers and fungus pathogens.

The adults emerge from soil and fly to birch trees in the spring when leaves are about half-developed. Females lay eggs in young leaf tissue, newly unfolded from the bud. Eggs hatch after about a week and the small larvae feed, the mines often becoming united to form single large blotches. Larvae become fully developed in 10-15 days and stop feeding. They open a hole in the leaf and drop to the ground, where they enter the soil, pupate, and emerge several weeks later as another generation. Since another generation is completed in 5-6 weeks, 2-4 life cycles may occur in a year. The last generation will remain in the soil until spring.