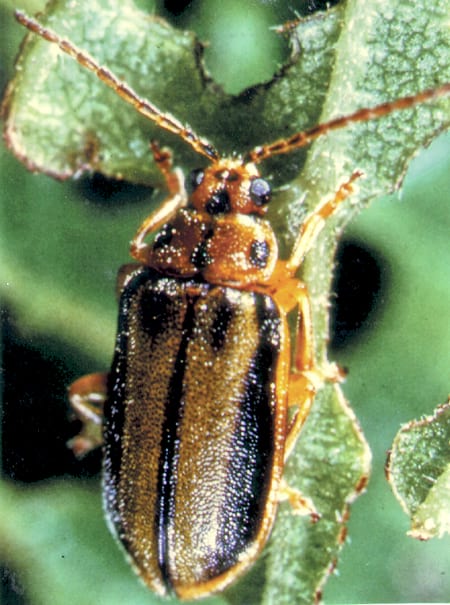 The Adults are Yellow to dull green with black stripe along sides; approximately 1/8 in. long. antennae and legs; yellow, eyes; black, head and thorax has black spots. The egg coloring is orange-yellow. The Larvae is tiny, black, grub-like; (later) yellow spotted with black, eventually growing to approximately 3/8 in. long.

All species of elm and Japanese zelkova are hosts and are found throughout United States and Canada; wherever elms and zelkova grow.

Reconized by massive adult activity around hibernation sites as weather warms (bud break). Upon reaching trees, adults chew circular holes in expanding leaves. Eggs deposited on undersides of leaves in groups of up to 25. One female may lay 800 eggs per generation, 25 at a time. Tiny black larvae feed on undersides of leaves, eventually skeletonizing them with only upper surfaces and veins remaining. Pupae are in crevices, in the bark, or on the ground, and under protected areas nearby. Repeated attacks annually can kill major branches or an entire tree.

Elm Leaf Beetle hibernate as adults in attics, patios, under shingles, becoming a nuisance in autumn. Become a nuisance again in the spring when they migrate back to trees at bud break to lay eggs on expanding leaves. Oviposition begins in late May and lasts several weeks. Larvae hatch in about a week , feeding on the undersides of the leaves until fully grown. They then crawl away to pupate in the crevices of bark, on the ground, or in branch crotches. Larval stage lasts 2-4 weeks, and the pupal stage about 10 days. There may be from two generations in the northeast to four in the south and west, depending on the weather. The first generation is generally the most damaging.