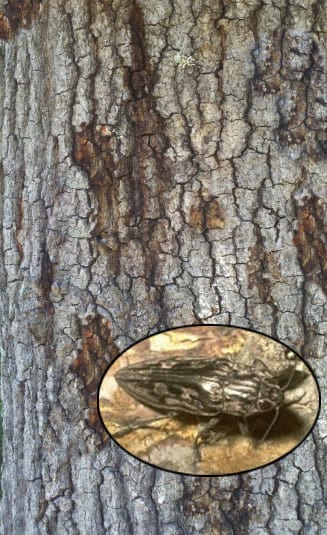 Chrysobothris californica (beetle) and many others.
Flatheaded borers egg galleries are laid in bark crevices. The larvae enter the bark where their eggs are laid, boring into inner phloem in irregular tunnels, partially filling them with powdery frass. They may even girdle a young tree.

Their larvae is creamy white, 3/8-1/4 in. long and are black tip at head and tail with a segmented head approximately three times as broad as their body. The adults are Flattened in appearance, 1/8-3/16 in. long and a dark metallic brown.

They infest many hardwood and conifers trees.

Flatheaded borers are found throughout United States, including Alaska including the Hudson Bay region of Canada.

Fire scars, root and trunk injuries, and other injuries causing stress including construction damage are the main factors that contribute to infestations.

Extensive mining of bark and cambium, sometimes girdling stems or roots of young trees; tunnels through sapwood and into heartwood, filled with frass.

Adults emerge from pupal cells in spring or summer, feed for a short time, mate, and lay eggs soon afterward. Eggs hatch in 10-50 days, and young larvae start mining. The larval stage may last for several years. Usually one generation every 1-2 years. Pupal stage generally lasts a month, but pupae may overwinter in some locations. Adults may overwinter in the pupal cell before emergence, or may hibernate overwinter before emerging. Adults die within 1-2 months after emergence.