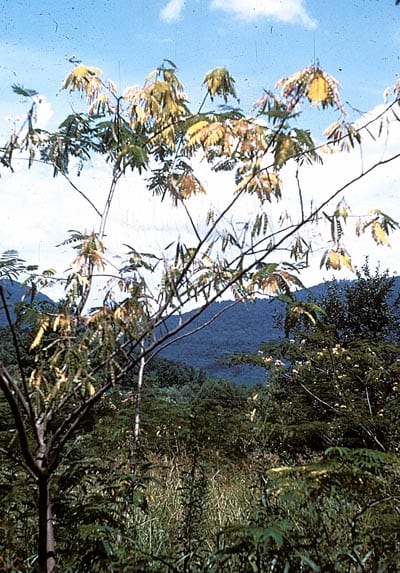 Members of the F. oxysporum species complex are cosmopolitan and many cause vascular wilt on many economically significant plants. Albizia spp. are the only known host of F. oxysporum f.sp. perniciosum.

Fusarium oxysporum f. sp. perniciosum colonizes and clogs the tree’s vascular (water-conducting) tissue, which interferes with the movement of water and nutrients. This results in relatively rapid tree death.

A very early symptom of Fusarium wilt is a brown-streaking in the wood beneath the bark and/or the roots; however, these symptoms typically go unnoticed.

The first readily noticeable symptoms are yellowed, stunted, and wilted leaves on one or several branches in early to mid-summer.

Later in the summer the affected branches may prematurely defoliate. Yellowed and wilted leaves continue to appear on more branches throughout the summer and fall, although in some cases a tree may die within a month of initial symptom appearance. Streaks of discoloration in the sapwood are very characteristic for the disease and can be observed by removing the bark on diseased branches or trunk or by observation of a discolored ring of sapwood in a cross-section of a diseased branch.

As the disease progresses cracks begin to appear in the bark. In some cases, gum or a white, frothy liquid with a fermented odor may exude from cracks. Sometimes a tree survives to the next growing season, but the new leaves will be stunted and yellowed and the tree will continue on a relatively rapid decline toward death. After the aboveground portion of the tree dies roots may still be alive and shoots may continue to sprout from the base of the trunk for some time.

Fusarium oxysporum f. sp. perniciosum is a soilborne fungus. The long-term survival of this fungus occurs by means of chlamydospores in the soil. When roots of host trees grow close to chlamydospores, root exudates are able to stimulate chlamydospores to germinate and produce mycelium. The mycelium then penetrates and colonizes the mimosa roots, moving into the vascular tissue where the fungus begins to produce microcondia.

The microcondia move upward with the tree’s sap and become deposited in various locations in the vascular tissue. Thus, a systemic colonization of the plant’s vascular system occurs. This eventually results in a clogged and defective vascular system.

When the tree defoliates prematurely due to this disease, the fungal pathogen grows out from the vascular tissue into the bark and begins production of pink to orange spore masses within sporodochia in lenticels. Macrocondia are produced in these spore masses. The fungus may continue to produce macroconidia for a period of two years after tree death. The macroconidia can be spread to new locations by air, water and insects; however, the primary means of spread occurs through water which washes the macrocondia into the soil where they germinate and produce chlamydospores. The chlamydospores can be spread to new locations through movement of infested soil or on contaminated equipment, tools, and shoes. The fungus may also persist in seed produced by diseased trees.