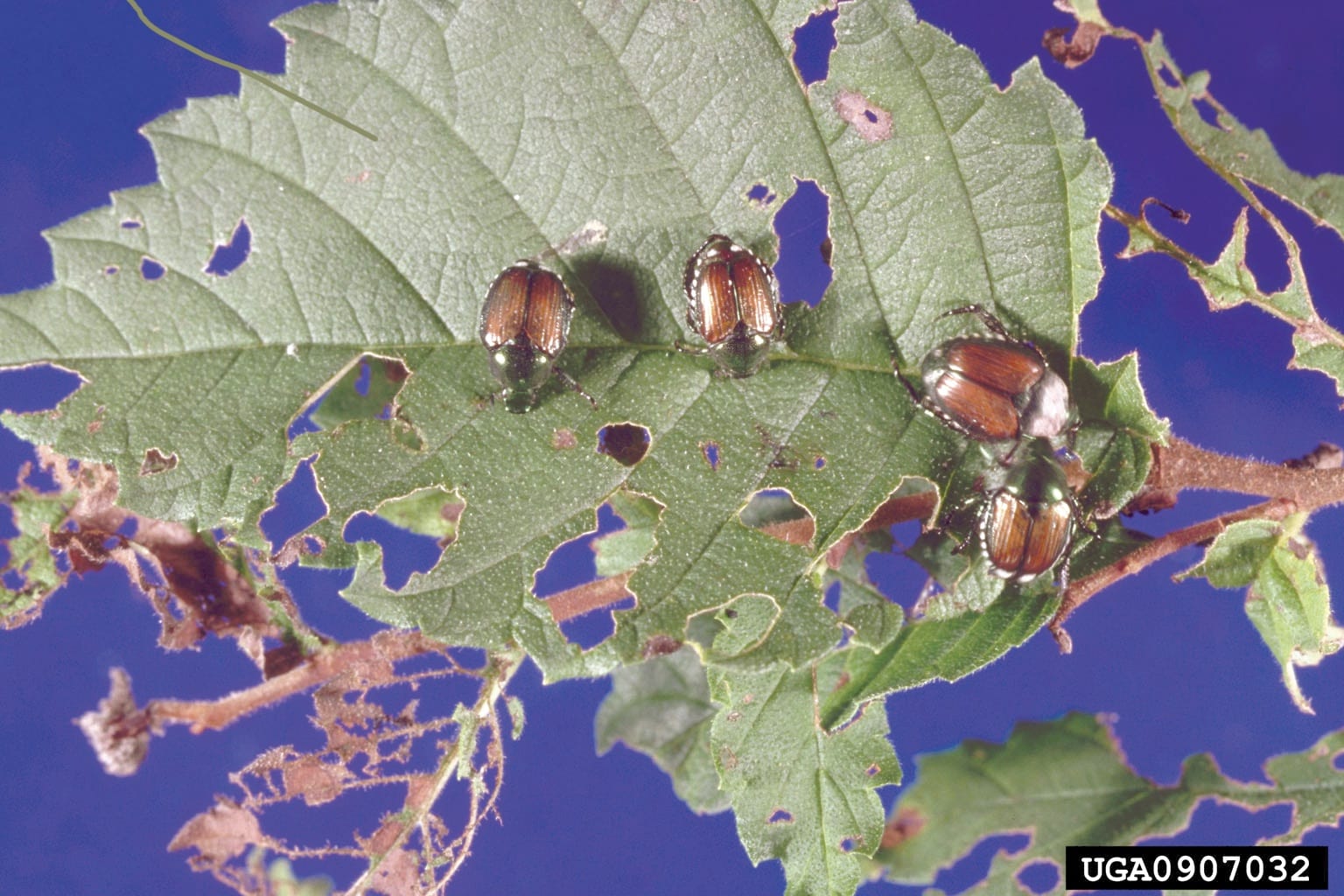 The adult are approximately 13 mm long, the Japanese beetle has a metallic green body and coppery wing covers. The eggs are white, translucent egg is almost spherical in shape. Their larva are white, C‑shaped grub has a dark brown head capsule and three pairs of legs and their pupa are 13 mm long, cream to tan colored pupa resembles the adult in appearance, except that appendages are pressed close to the body.

The list of Japanese beetle host plants is seemingly endless. Grub infested lawns are a common source of beetles that attack woody plants and trees.

Since 1916, the Japanese beetle has become established from southern New Hampshire and Vermont southward into North Carolina and westward into Ohio and West Virginia. Scattered local populations have been reported in Indiana, Illinois, Tennessee, Kentucky, Michigan, Iowa, Missouri, California, South Carolina, Georgia, Maine, and in Canada; Ontario, and Nova Scotia.

Japanese beetles are voracious foliage and fruit feeders. Damaged foliage is characteristically ragged, with only the larger leaf veins intact. Stringy, black excrement is also present. Japanese beetle injury poses a threat from mid‑July until August. After this period, the population naturally declines. The beetles have many host plants. Japanese beetle grubs overwinter as third instars within 13 cm of the soil surface. As the soil warms in the spring, the grubs move closer to the surface and feed on fine turf rootlets. Shortly thereafter, they remain inactive for a 10‑day period prior to pupation. After a pupal stage of 8 to 20 days, adults emerge. Emergence usually begins in mid‑May in North Carolina and as late as July in Maine. On warm days, the beetles fly and often congregate on host plants to feed and mate. In the afternoon, females burrow into loose, moist soil (usually in sod), and deposit one to four eggs. Over her 1 to 1 1/2 month life- span, each female produces 40 to 60 eggs. Grubs emerge 2 weeks after egg deposition, feed on turf rootlets, and remain active until cold weather arrives. In North Carolina, a single generation is produced annually.