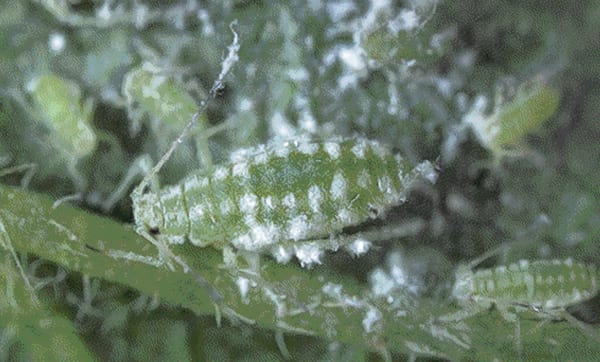 The female adult is wingless and appears to have been rolled in flour . It grows to 3 mm long and 1.5 mm wide. A fringe of small waxy filaments protrude from the periphery. The males are small, but with its wings and tail filaments, it appears to be 4.5 mm long. It’s eggs are oblong, yellow eggs are enmeshed in a dense, fluffy, white ovisac. The crawler are tiny and oval and yellow, with red eyes. The antennae are rather rather distinct. Female nymphs resemble the larger adult females. Male nymphs are narrower and often occur in a loose cocoon.

Citrus mealybugs occur in southern Europe and in the southern United States, where they overwinter outdoors. Further north, they survive in interiorscapes and homes.

Citrus mealybugs have been collected from at least 27 host plant families. Many ornamental plants grown in interiorscapes are susceptible to attack.

Mealybugs damage hosts by sucking out plant sap, by excreting honeydew in which sooty mold can grow, and by causing distorted growth and premature leaf drop with their toxic saliva. They further disfigure plants by secreting cottony wax. Infested plants usually die unless the pest is controlled.

The mealybug has been recognized as a pest of citrus and ornamental plants in Europe since 1813 (where it is called the greenhouse mealybug) and in the United States since 1879. Because female mealybugs have no wings, they must be transported to the proximity of the next host plant. They can, however, travel short distances by crawling and the immatures can be blown about. Males are small, winged insects. After mating, each female lays up to hundreds of eggs in a dense, fluffy secretion called the egg sac or ovisac. Within a few days, new mealybugs (crawlers) hatch and begin to squirm out of the ovisac. Light infestations are easily overlooked because the mealybugs tend to wedge into crevices on the host plant.