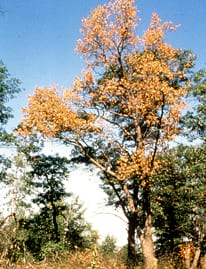 Found Throughout the United States: Midwest, from Texas to Minnesota, Wisconsin and Michigan, Pennsylvania, West Virginia and possibly more.

Symptoms vary depending on geographic location and host tree. For example, in the red oak group, affected trees initially show a bronzing or wilting of leaves on an individual branch or in a portion of the tree’s crown. Leaves exhibit a “half-leaf” symptom, where the outer half of the leaf scorches and turns red or brown, while the inner half of the leaf (nearest the petiole) remains green. The fungus will sometimes cause a brown streaking of the sapwood. Within a few weeks, the wilted leaves begin to drop. Wilting spreads throughout the tree canopy during the summer. Most oaks in this group are killed in one season. The white oak group has a greater resistance and may often recover. Live oak appear to be intermediate in resistance.

At the time of wilting, C. fagacearum is present throughout the symptomatic part of the tree and in the roots. Ceratocystis fagacearum may remain alive until the next year in the trunk, and up to four years in the roots, initially growing both toward the inner sapwood and outward to the cambial region and inner bark. Pathogens can spread to adjacent trees by root grafts. Long distance spread can occur from beetle feeding.