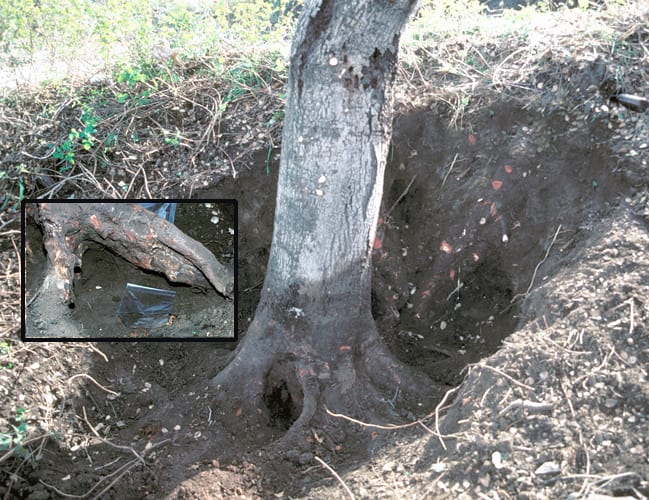 The pathogen survives in soil for several years as spores, especially in poorly drained soils. Too deep planting may contribute to the severity of this disease. Cool, wet weather favors development of the disease in the spring.

Phytophthora is a Soil borne fungal pathogen. Cankers may be seen at or below the soil line and may extend into the root system.  The infection can also invade the trunk or main stem.  Susceptible scions can be infected at the bud union. Infected bark is brown and often slimy when wet. When the bark is pulled away, the cambium and phloem will be an orange, reddish brown color. The cankers caused by the fungus girdle the tree, resulting in poor vegetative growth and chlorotic foliage that may turn purple in the autumn. A severely infected tree may die. Trees may be killed in one growing season or may linger for a number of growing seasons.

This fungus survives cold weather and drought as thick walled resting spores (oospores) in infected tissue or in soil. The resting spores are capable of surviving extended periods of time in soil. The fungus may build up to high levels in the soil in a short period under favorable conditions – i.e. during wet, cool periods. Under moist conditions, they germinate, forming another type of structure called a sporangium. A sporangium is a minute reproductive structure produced by the fungus in response to free water. The sporangia germinate in the presence of free water, releasing numerous one-celled, motile spores called zoospores. Zoospores swim through a thin film of water, contact roots or lower trunks of potential hosts, germinate, and infect. Although host wounds are frequent infection courts (areas where infections are initiated), the fungus can also directly penetrate host tissue. The fungus grows through host vascular tissue eventually girdling the tree. As the host dies, the fungus forms resting spores in the decaying tissue. Research revealed that the fungus is readily transported in irrigation water. Few agricultural soils should be considered free of the fungus once they have been irrigated. Infection is most likely to occur during cooler weather, i.e. early spring and fall. Research has indicated that trees are most susceptible during the bloom period.