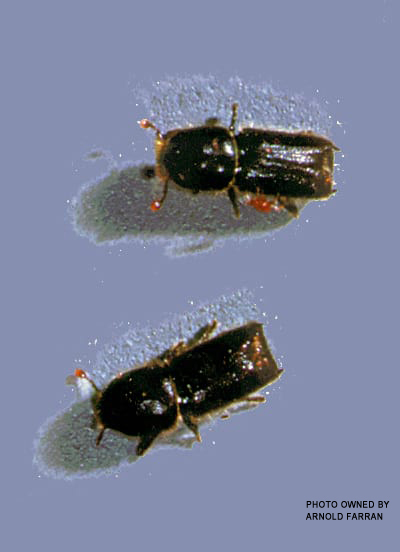 They are found in the throughout the United States and Canada.
Poor sites, drought, nutritional deficiencies, wounding, and root impaction all contribute.

Twigs yellowing, browning, wilting at tips and hanging; egg and larval galleries immediately under bark; small droplets of pitch below feeding areas on twigs and stems on some species. Host trees usually weak on poor sites or under stress. Trees killed by infestations.

Adults attack all upper parts of weak, dying or dead trees, or broken branches while others attack other portions of trees. Prior to constructing egg galleries, adults feed on healthy twigs, branches and stems, girdling them until water and nutrient flow is stopped. Egg burrows made by adults working in pairs. Eggs uniformly spaced along sides of burrows. Larvae feed laterally from one egg gallery. Attacks in spring and summer, with 1 1/2 generations per year but may attack during other times of stresses.